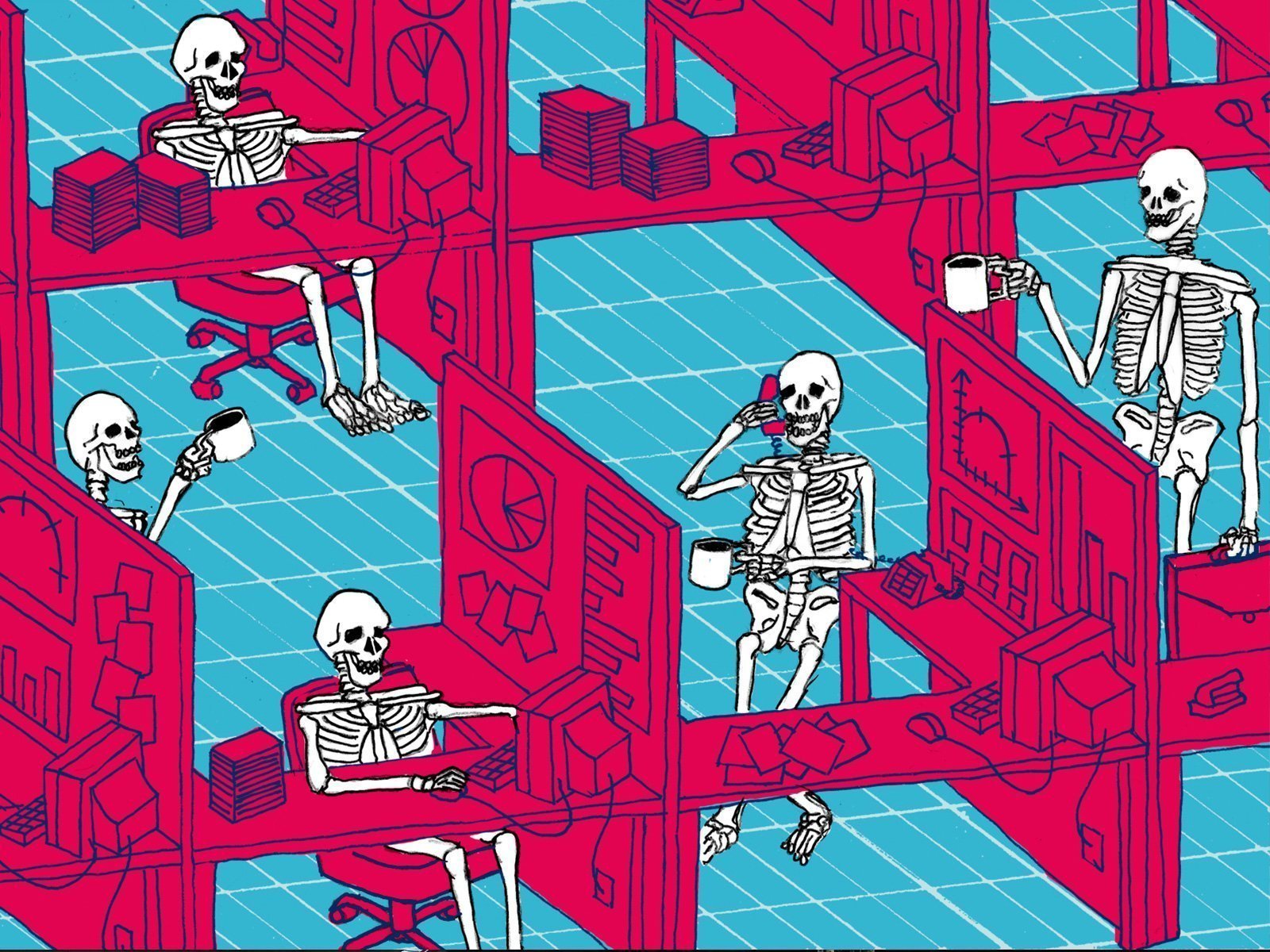 If you’ve ever been employed, chances are you’ve dealt with issues concerning ‘internal communications.’ While it describes the ways in which information is shared among participants in an organization, the phrase is often used in the context of communication breakdown between those at the top and the rest; for example, when a sizable number of workers express their frustration with the decision-making process in their workplace. This creates a bit of an awkward situation in which company leaders (which in 2019 usually means a small group of people representing white, male patriarchy) have to (re)discover what democracy means, and somehow apply its principles to their style of leadership.

To be clear, there is no silver bullet when it comes to addressing the abysmal levels of employee engagement in the U.S. Managers can read publications like Gallup’s “State of the American Workplace” and Deloitte’s “Global Millennial Survey” until the end of time, but it means nothing if they don’t address the unique challenges in their workplace. This starts with a clear choice between authentic and inclusive two-way communication, or an endless cycle of diagnosing and diverting issues at work.

Once negative employee feedback reaches a certain threshold (or a sufficient number of people leave or become disgruntled), Management tends to face two distinct possibilities. They can 1) listen to workers and provide concrete ways to improve communication or 2) hire outside consultants, diagnose the issue, create internal committees, and repeat every year without actually providing solutions.

I am guessing many of us have more experience with the second scenario, in which executives assure employees that internal communication issues are being addressed through workshops, tech applications, additional meetings, happy hours, and other corporate rituals. Nevertheless, after 2-3 cycles of “workshopping” the same organizational issues—sometimes in the course of decades—seasoned workers realize that co-ownership, transparency, and accountability within an organization don’t start with Human Resources and outside consultants, but with those at the top.

At that point, employees can either fight to instill some democratic values in their workplace, become disengaged and “check out” at work, or try their luck elsewhere.

Those who are new to the workforce may not realize that this is the game many of us play in the Capitalist Experiment. It’s not hard to figure out why—schools prepare most of us to get accepted into the workplace, not to actually have agency once we are in. This dynamic takes a particularly masochistic turn in workplaces where employees are told that the Mission of their organization supersedes issues regarding work culture, salaries, performance valuation, and so on. In many cases, negative employee feedback never even reaches the main decision-makers, simply because there’s no mechanism to consider what staff have to say, or there’s a sufficient number of “buffer” workers, aka “middle management,” whose job it is to shield their bosses from having to directly address employee feedback.

Keeping in mind the grotesque levels of income inequality in the United States—where the top 0.1% own as much as the bottom 90%—the state of workplace affairs today is reflective of the exploitation and injustices needed to maintain inequality levels that are higher than those of ancient Rome. One of the main reasons why progressive politicians like Bernie Sanders are embraced by the U.S. working class is because they point out the unjust and immoral treatment of workers when it comes to receiving a living wage. “Does Disney CEO Bob Iger have a good explanation for why he is being compensated more than $400 million, while workers at Disneyland are homeless and relying on food stamps to feed their families?,” Sanders tweeted last year, as reported by Variety.

While high-level executives tend to lack explanations for pay disparities, they are well-resourced when it comes to absolving themselves of any responsibility regarding the lack of substantive communication in their organization. When the “communication vacuum” non-strategy becomes too noticeable, those at the top can always turn to one of many “workplace consulting” companies which are paid to create the perception that something is being done to address the lack of democracy.

This is usually done through a combination of webinars and in-person meetings during which consultants with names like “Advanced Workplace Associates” and “Center for Generational Kinetics” collect accounts from employees, diagnose the issues in their particular workplace, and then create presentations with a lot of cool graphics and “next steps,” but very little when it comes to structural solutions. This is because such companies are often hired by Management, which means that their success depends on creating a perception that organizational issues are being addressed, regardless of whether that’s actually true.

As a result, serious problems like sexual harassment, lack of diversity, and dysfunctional internal communication in the workplace (issues that require top-down leadership) are placed in the expensive domain of workplace consultants. HR and Marketing departments are essential in this process, as they help executives retain power without evoking too many similarities to an oligarchy, in which a small group of people rules over everyone else.

Simply put, instead of improving internal communications, organizations often do the exact opposite—they enact a set of strategies that not only obfuscate employee feedback, but diffuse accountability for those who should be fostering employee engagement in the first place. CEO’s, Boards of Directors, and other members of “Team A” often fail to realize that workers see right through such obfuscations, which are further proof to them that their workplace isn’t as democratic as their “leaders” would let them believe.

To understand this dynamic in practice, look no further than the once-a-year performance review—a universally-hated and ineffective method for evaluating workers’ labor. The solution isn’t to get rid of the review, but to foster regular engagement in which the employee and employer are on a leveled playing field from the start, rather than encapsulating work, salary, and performance questions into an awkward yearly meeting. Many company “leaders” seem incapable of handling that task, which is why they either half-ass their performance reviews, or delegate possible solutions to tech products, consultants, marketers, and so on.

While those who are incapable or unwilling to engage workers go on to retire and comfortably live out their lives, the cost of millions of workers who spend the majority of their time in undemocratic environments will be felt for decades. An even bigger tragedy is the high likelihood that employees who believe that being a workplace sociopath gets you far, will continue to propagate the same ruthless practices to prevent the next generation of workers from organizing.

To break this cycle of cynicism and exploitation, we need to demand actions and concrete structural solutions to our workplace problems, and question the motives of executives who have embraced an authoritarian style of leadership. This requires us to see through phrases like internal communications and employee engagement, and examine the source of the issue—the lack of democracy in the modern workplace, where corporate capitalism has disintegrated our social fabric.

“Marx was fascinated by how capitalism not only worked as an economic system, but how it impacted individual people,” says Richard Wolff, leading U.S. socialist economist, in an August, 2019 interview with Abby Martin on the show The Empire Files. Wolff continues:

Human beings want to be involved in and engaged with what they produce … but in capitalism, the worker is shunned at the end of the day. Marx argued that workers suffer from this experience, internalize it, feel somehow that maybe they deserve this (turn in on themselves), and maybe need, at the end of the day, to go and have a happy hour for a couple hours to get over, because they have just been abused, in a way. And the alienation has long term political affects. If you are denied at the workplace … how excited are you going to be to get involved in politics? You are actually being trained every day to not be involved in making the big decisions … you are alienated from your capacities as a human person to have some say and some control over what happens in your life. And it’s very damaging, Marx argues, to be stuck in a capitalist system that alienates them from themselves in this way.

For all the pseudo-scientific articles on generational work preferences and trends, and thinly-veiled PR pieces promoting work consultants and workplace tech applications, there’s very little written and said about the need for authentic communication between participants in an organization. Perhaps doing so would eliminate the need for “experts” to parachute into workplaces and would make those at the top accountable to the rest of the organization.

In any case, our topsy-turvy reality shouldn’t stop us from exposing the masquerade played in office spaces and cubicle farms throughout the U.S., where Trumpism has long been—and continues to be—embraced by America’s corporate elite. 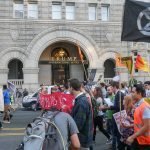 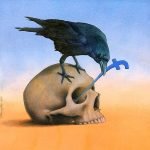